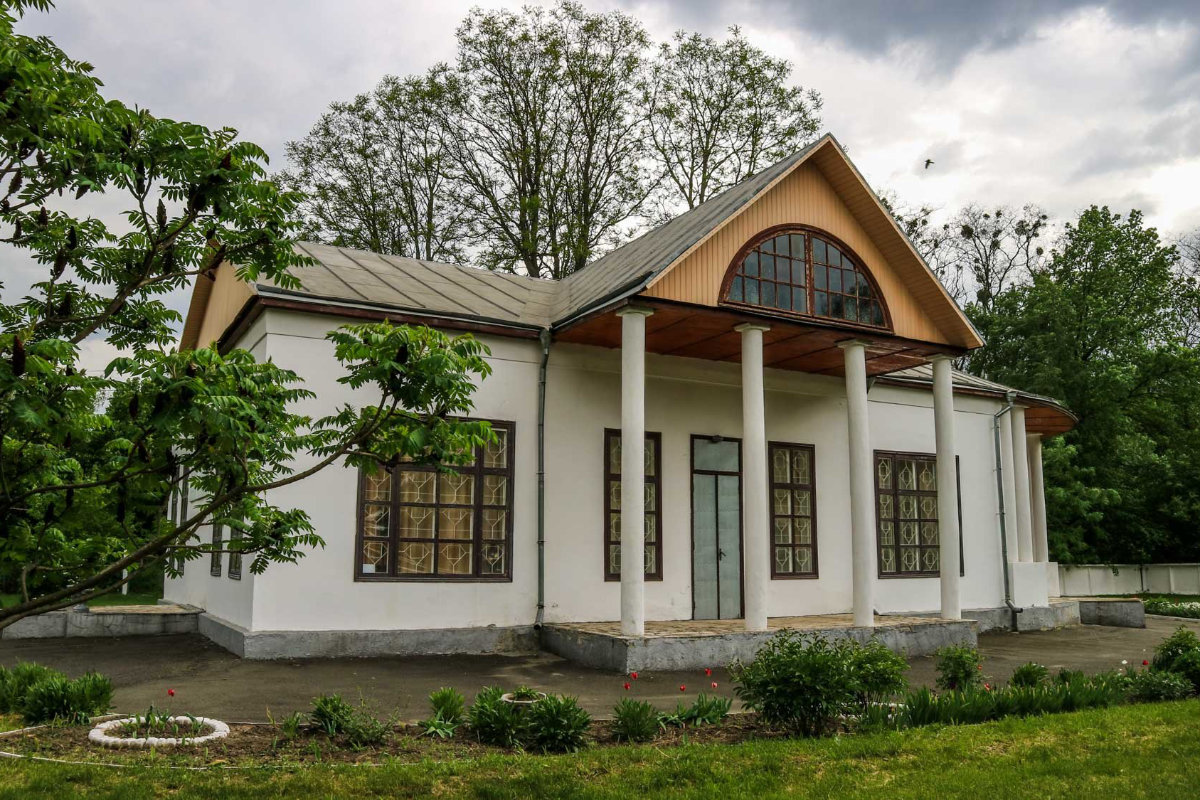 The Taras Shevchenko Courtyard House-Museum is a centre dedicated to preserving the memory of the great poet-philosopher’s stay in Yahotyn. One of the subsidiaries of the Yahotyn State Historical Museum, it was once a part of Prince Mykola Repnin's estate and served as a guest-house for the Repnin family's friends.

Taras Shevchenko stayed here during a visit in 1843, and later in 1845. He also stopped by here in 1859 after his return from exile. Here, he painted and wrote in a warm and inviting environment; one conducive to inspiration, creativity, and productivity. Granted full access to the rich library, he enjoyed the company of princess Varvara Repnina who translated foreign literature for him, and he associated freely with progressive thinkers, particularly the Psiyol sisters who lived with the Repnins. Most importantly, some of the works he created here eventually became classics – for example, the poem Tryzna (originally known as “Unlucky”) written in 1843 and dedicated to his patron, princess Varvara.

Additionally, he created his famous pen-and-ink self-portrait at the oak desk, on display in his former studio office. Few know that, in Yahotyn, Shevchenko not only worked on the portraits of the Repnin family members, but he also painted the walls of the courtyard wing where he lived from the autumn of 1843 to the winter of 1844. Today, visitors to the museum can see this depicted in the painting by the contemporary Kyiv artist, Ivan Lysenko.

Not only does the museum recreate the former interior, but also the atmosphere of the guest house on the prince’s estate.  The visitor is surrounded by portraits of prominent individuals and by the original 19th-century furniture – the earlier-mentioned carved desk and oak chairs in the studio; the piano from Italy in the parlour; and the bed in the bedroom. Of special significance is the red velvet chair in the office. It was here that Princess Varvara wrote the letter to Charles Eynard (her spiritual father in Switzerland) in which she spoke glowingly of the young Shevchenko whom she held in extremely high regard.

One, not well versed in the history of the Courtyard Museum, would be hard pressed to believe that this building was completely rebuilt from ruins. Due to the tireless efforts of preservationist of his native land’s historical sites, Oleksandr Neporozhny, the museum opened to the public in the fall of 2003, on Yahotyn Day. The museum staff and volunteers have converted four rooms, a corridor and lobby into a centre that preserves and honours the memory of Shevchenko and embodies the spirit of the great Bard of Ukraine.

In the Gallery of Memory, one can see works by contemporary Ukrainian artists. Each canvas, whether by Ivan Zhurakovsky, Yevhen Lanko, Volodymyr Pantasenko, or the earlier-mentioned Lysenko, reflects a moment from Shevchenko’s stay in Yahotyn. The artistic rendering of these paintings preserves the feel of the past and captures the essence of Shevchenko himself – a highly-talented, yet humble individual.

Under the guidance of director Larysa Husak, the Courtyard Museum is well curated and presented. On display are works by local professional and amateur artists which reference Shevchenko’s sojourn on their native soil; most highly represented are the paintings of Mykola Malynka (1913-1993) who created a rich collection of Shevchenkiana; and of note are the paintings “Shevchenko on the Banks of the Supiy” and “Rainbow”.  The portrait of Shevchenko by Oleksandr Neporozhny (1921-998) reflects another facet of him as an initiator of the restoration project  – that of a painter. Also connected to Shevchenko is the local Trinity Church (Troiitska tserkva) built by Hetman Kyrylo Rozumovsky (destroyed in 1936) and reproduced in a painting by the self-taught artist, Pavlo Vasylenko (1920-1992), from a black-and-white photograph (a copy by same author of Shevchenko’s painting Maria also displayed here).  Shevchenko loved to visit the market near Trinity Church  where he enjoyed listening to the local minstrel singing and playing his kobza. And it was that very church he placed in an episode of his story, “Twins” (Blyznyuky).

It is no wonder that Shevchenko was to write: “All my days spent in Yahotyn are, and will remain for me, a series of wonderful memories” (1850). 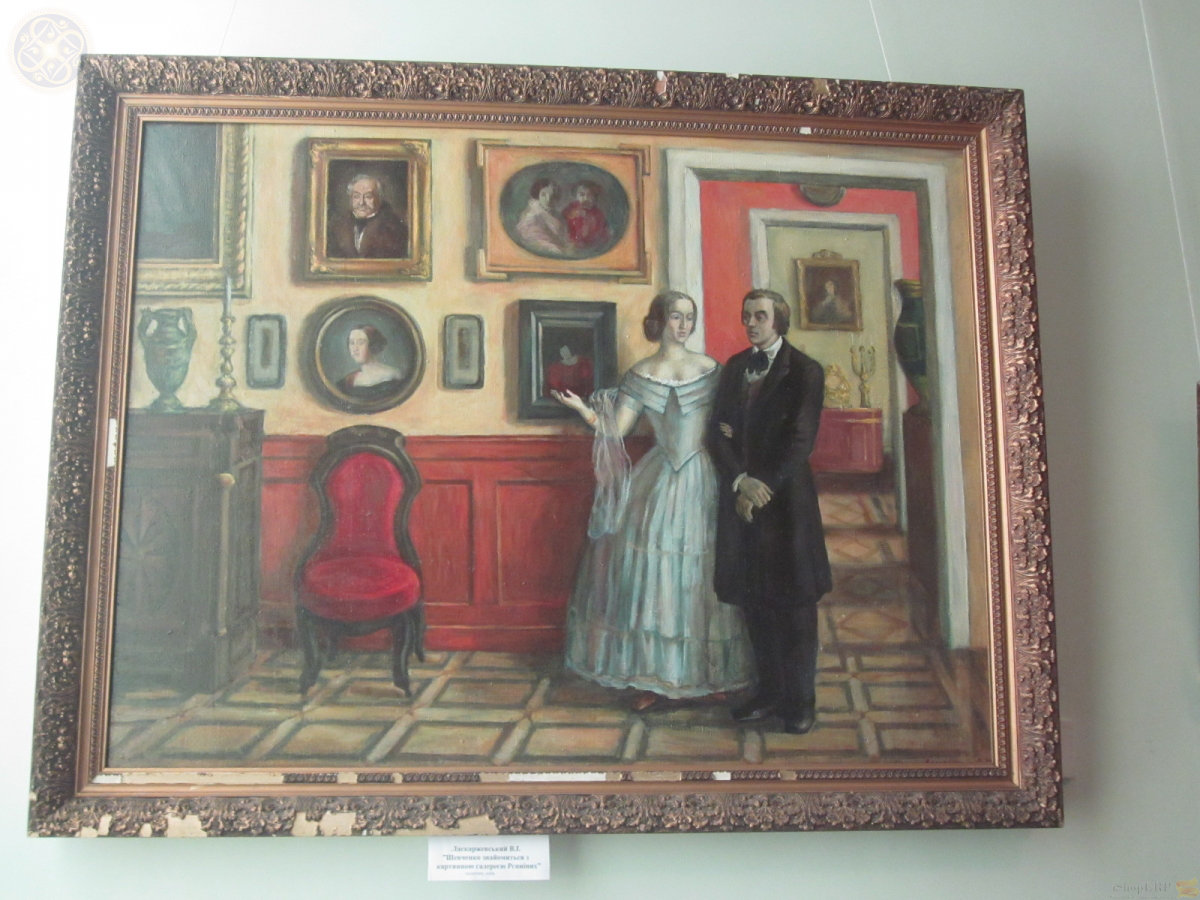 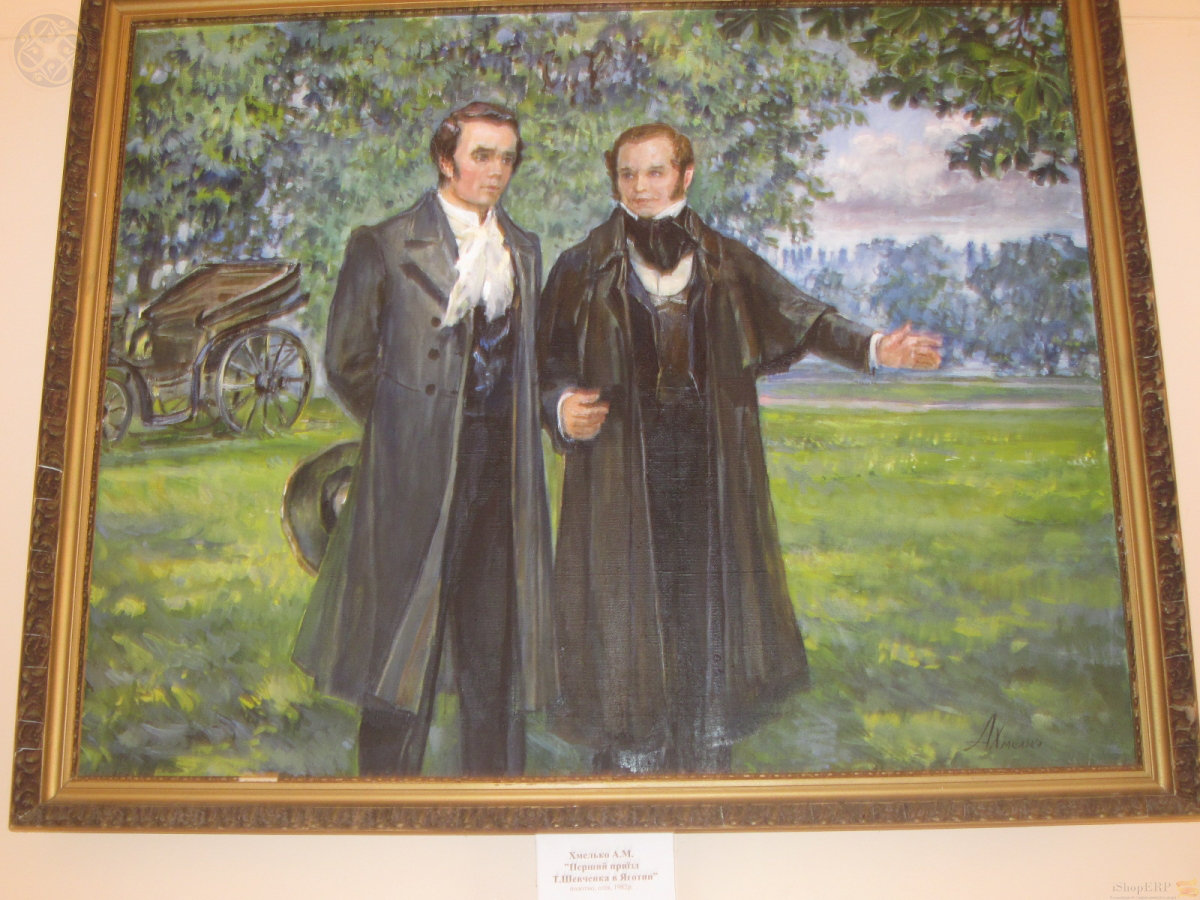 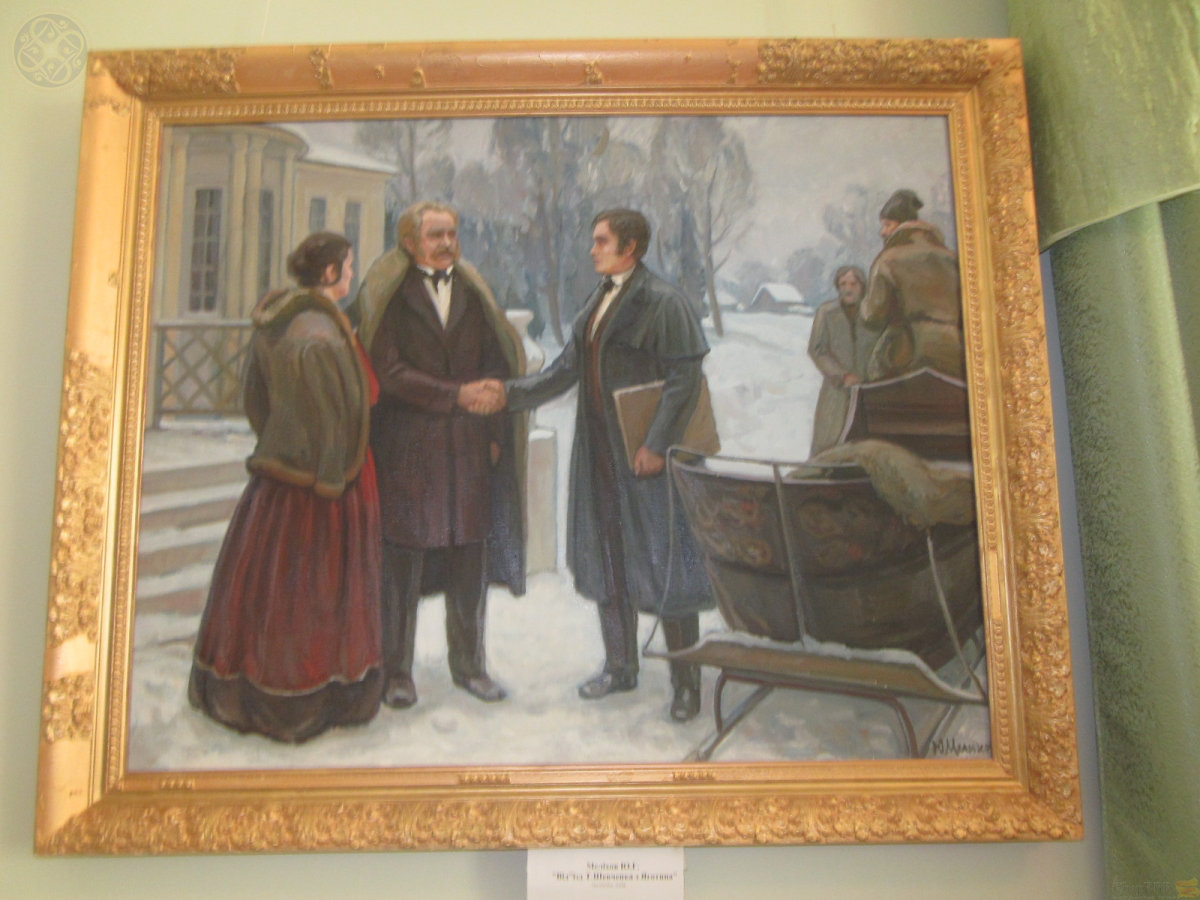 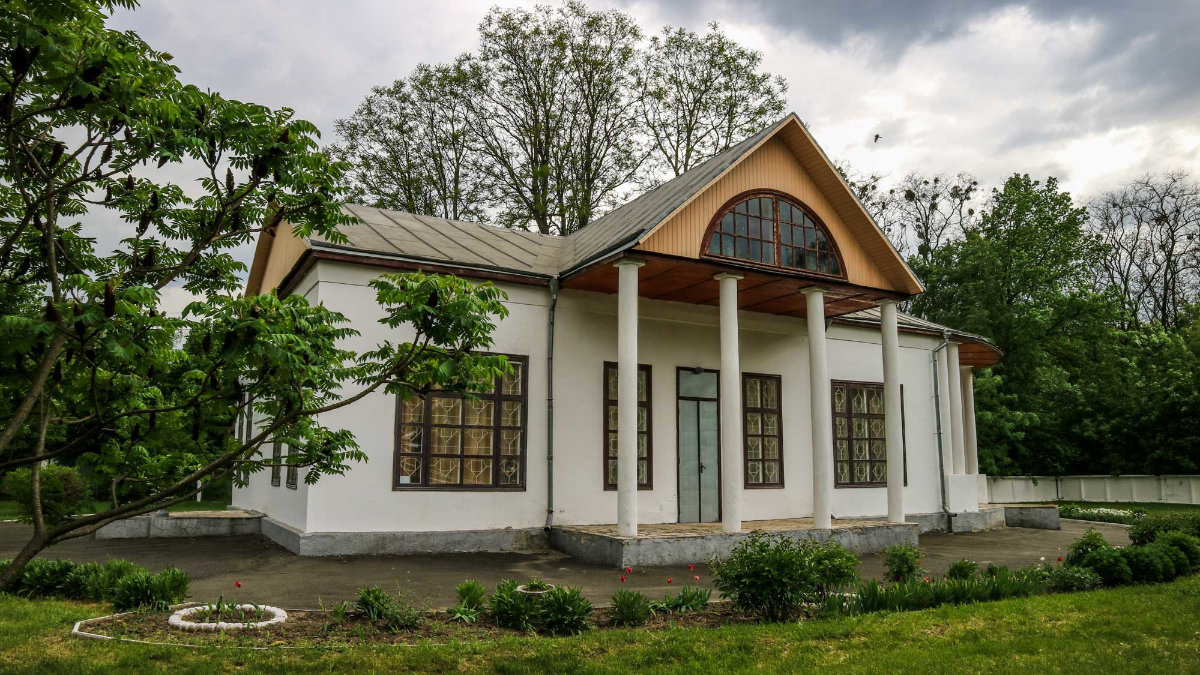 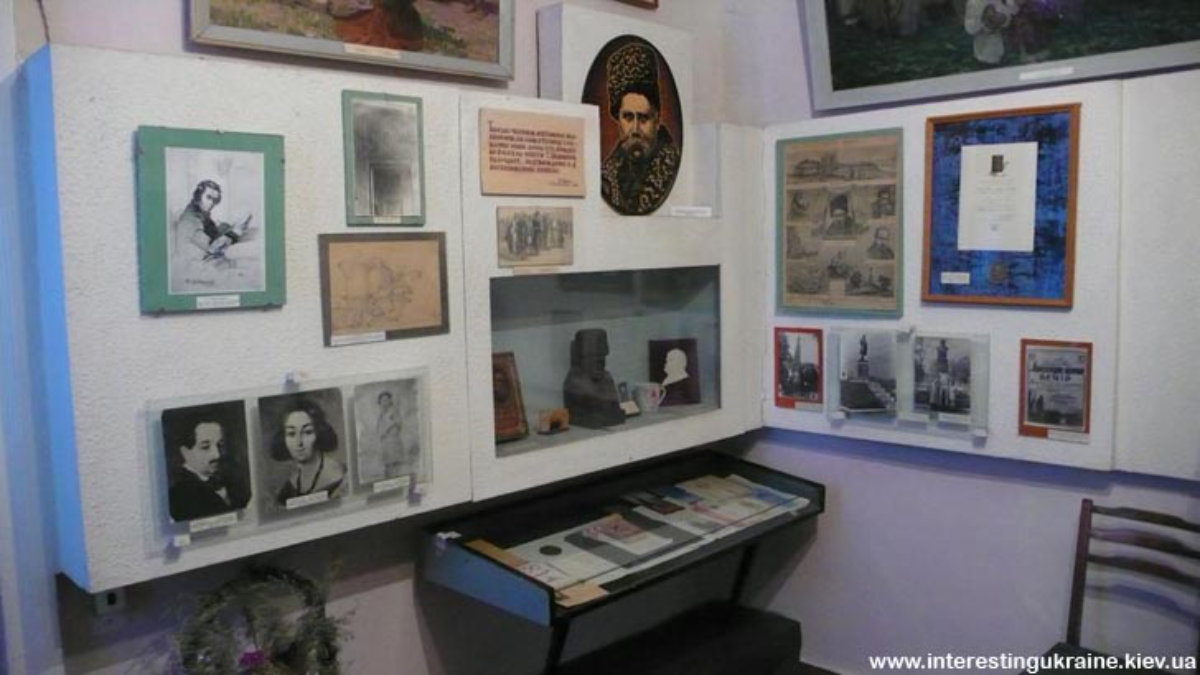 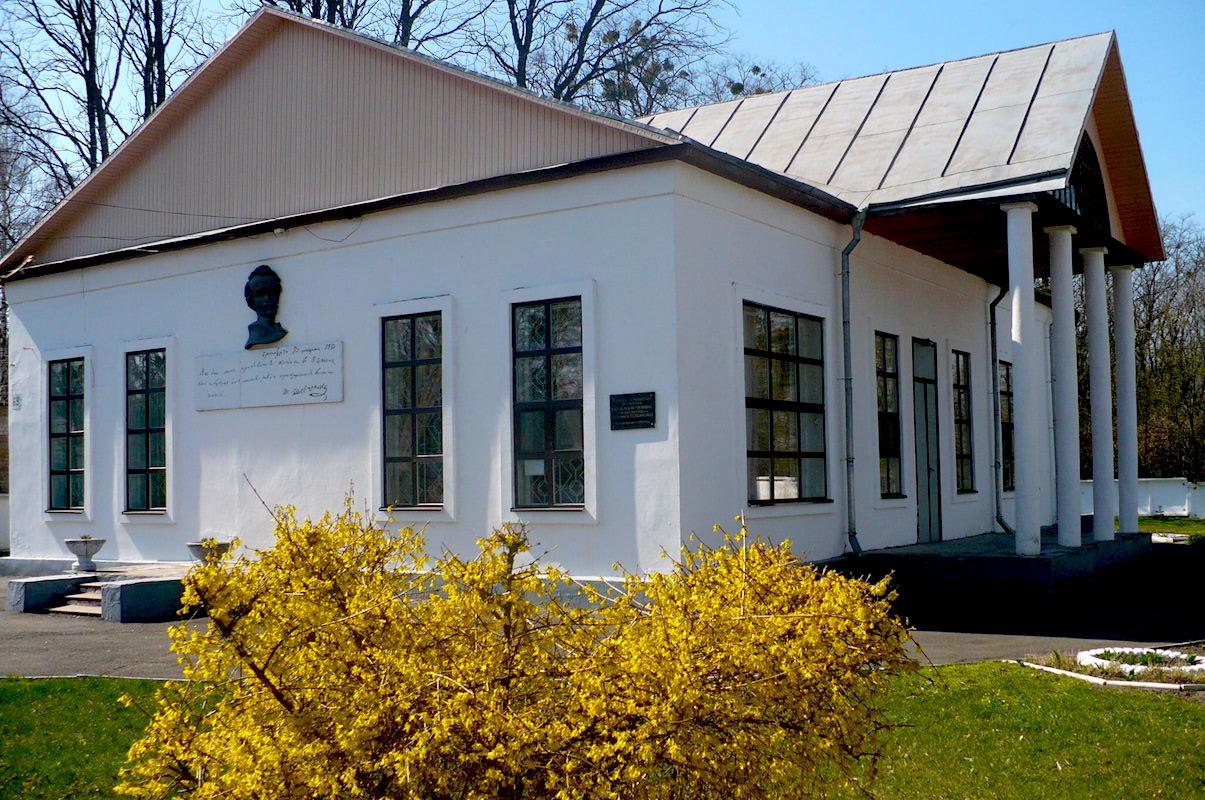 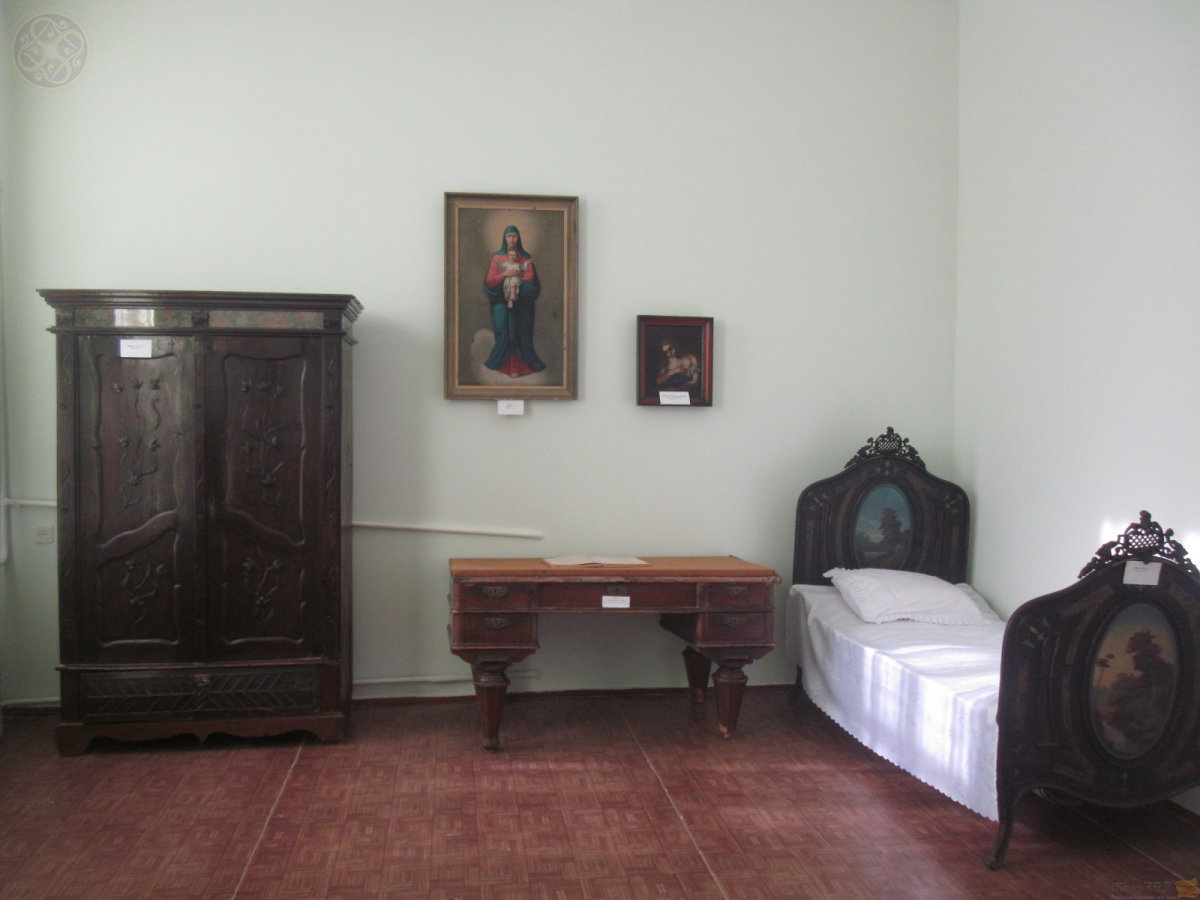 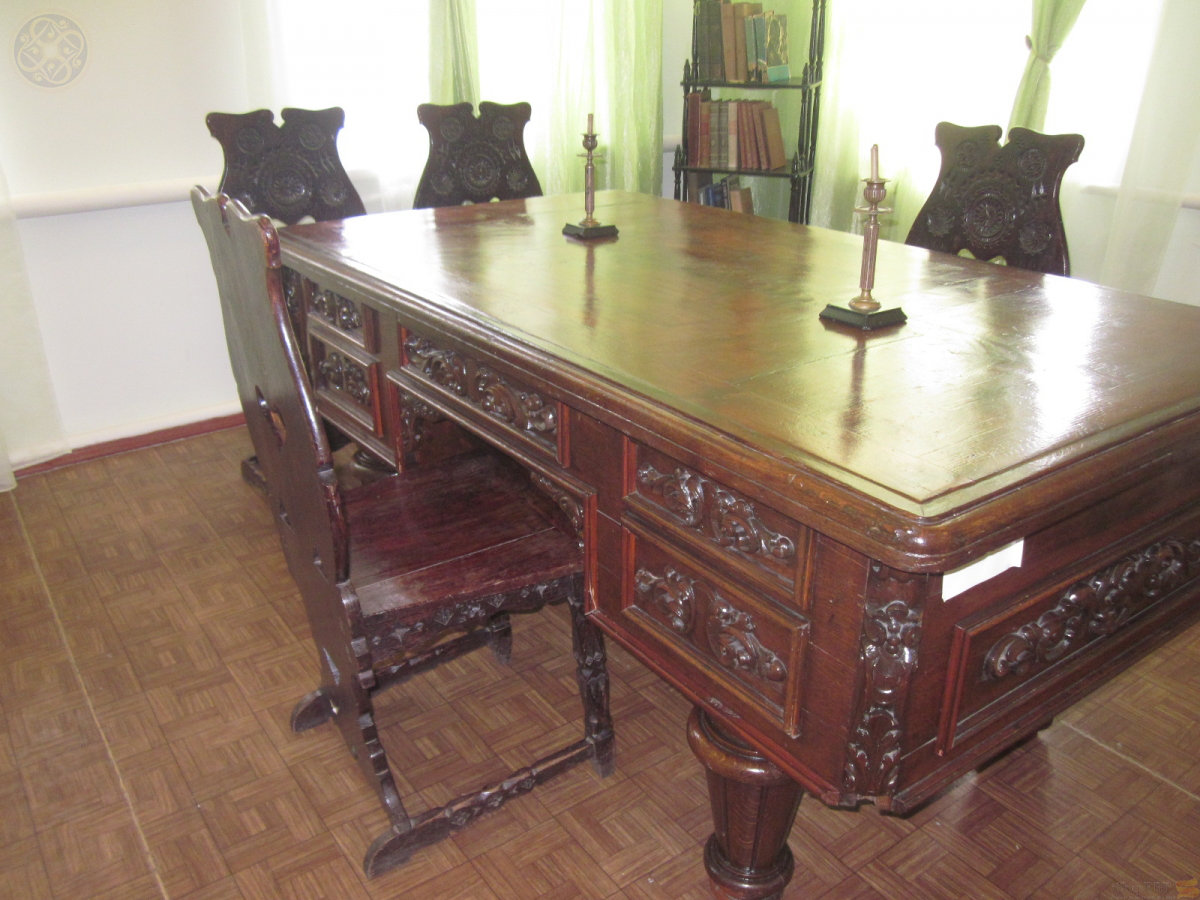 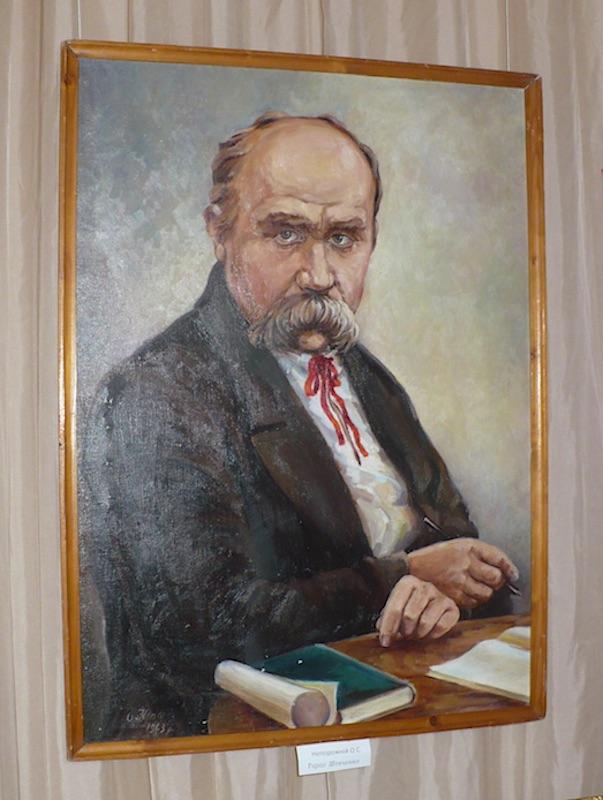 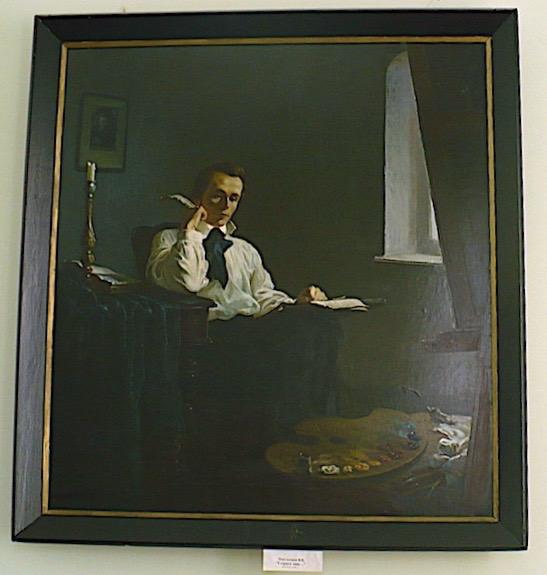 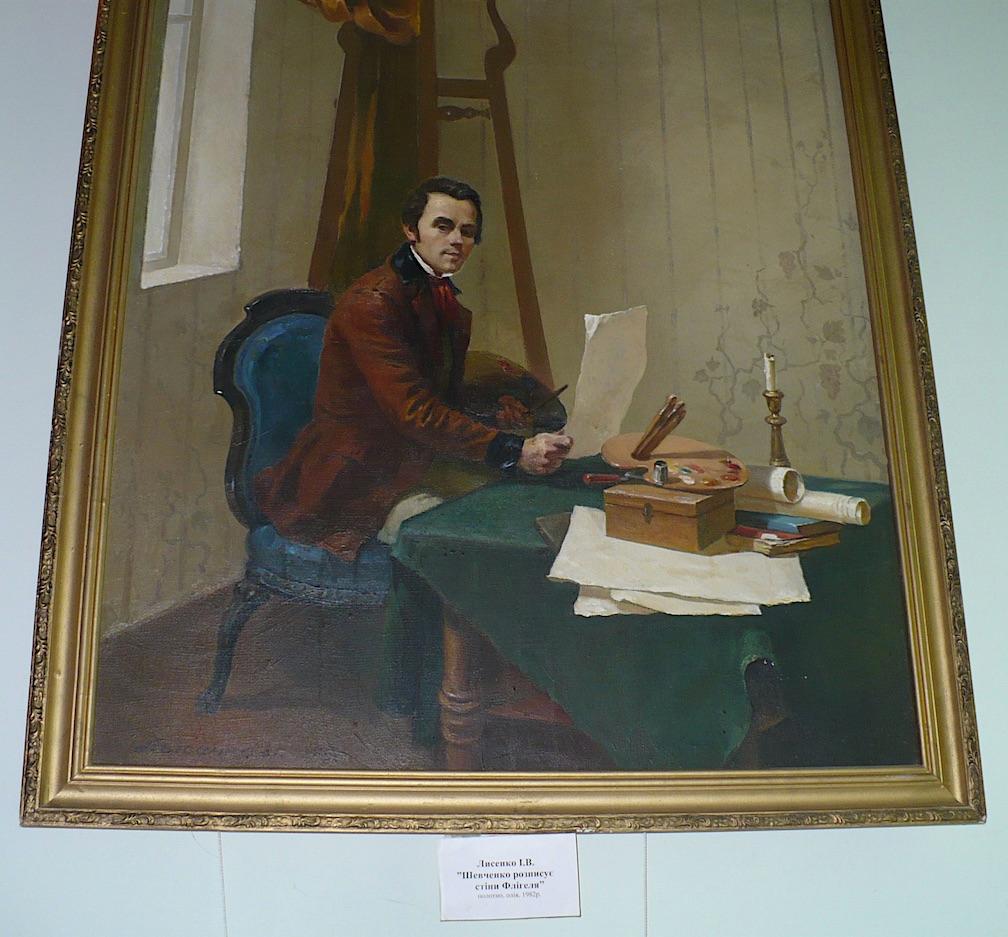 Shevchenko painting the walls of the courtyard wing. Oil painting by Ivan Lysenko 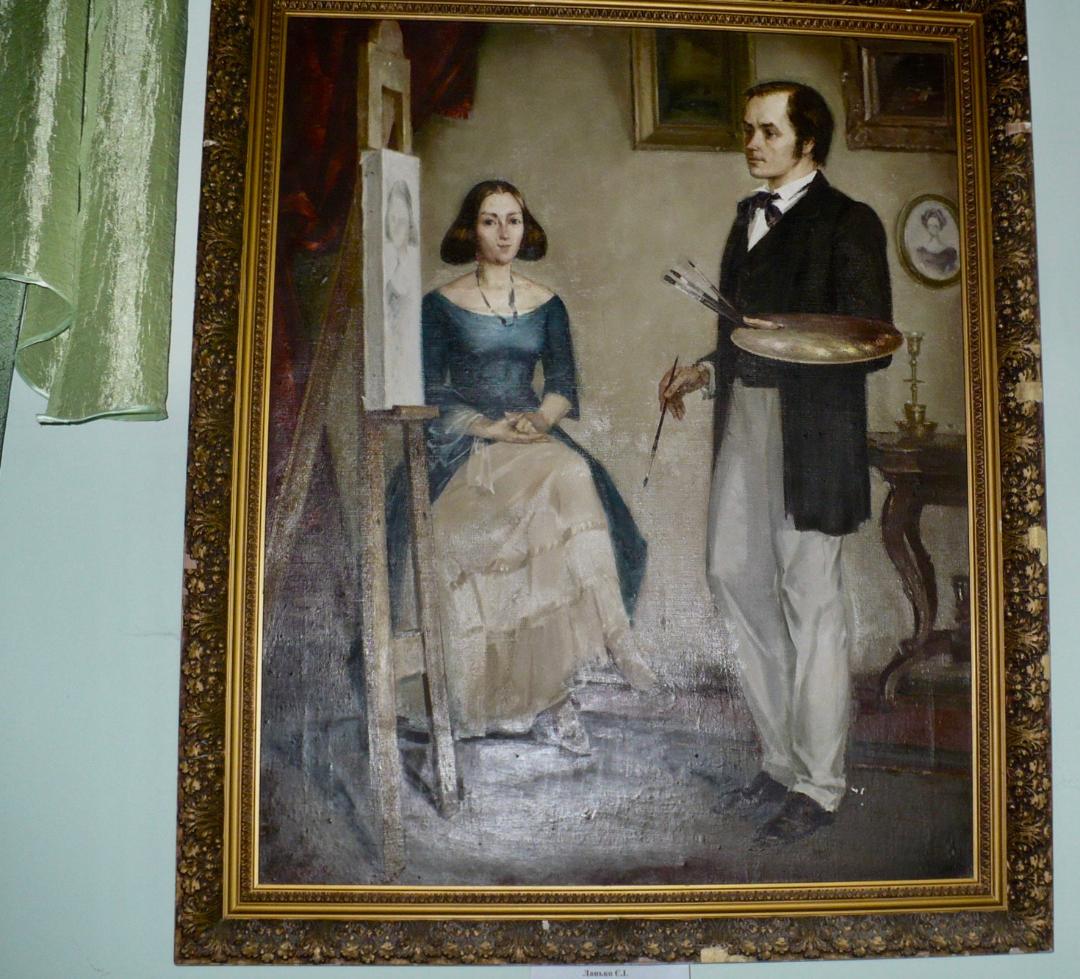 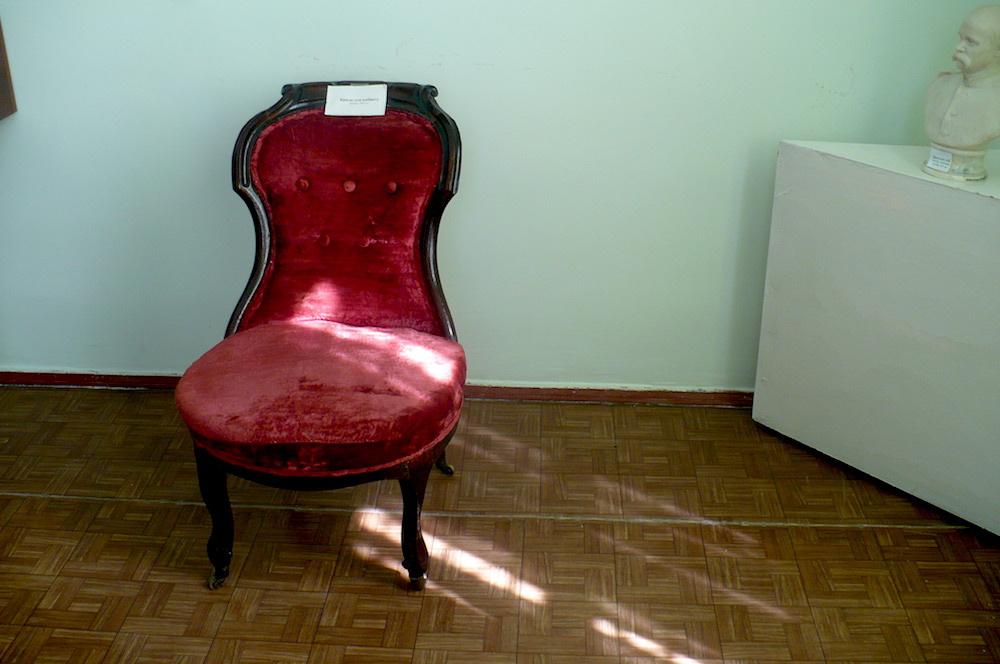 Red velvet chair in the office 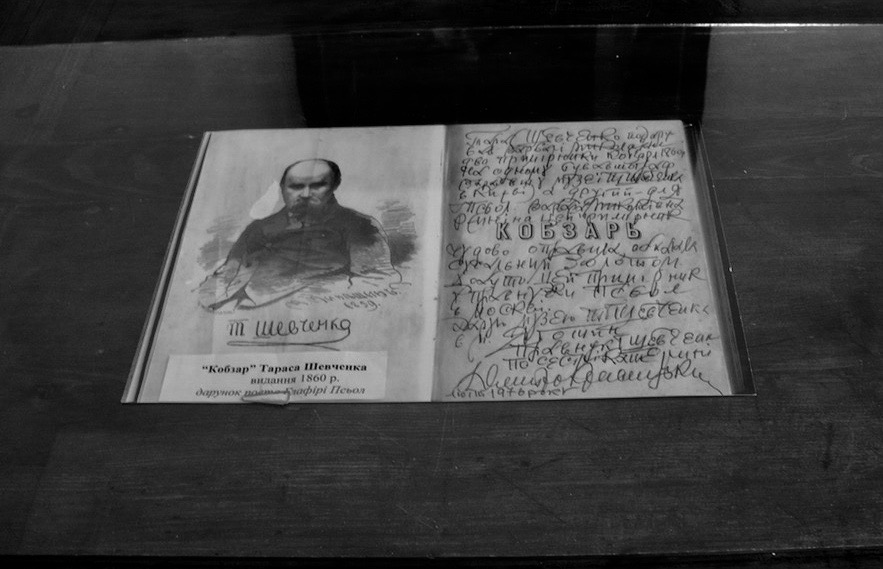 Kobzar presented by Taras Shevchenko to Glafira Psiyol. This book was a gift to the museum by Dmytro Krasytsky 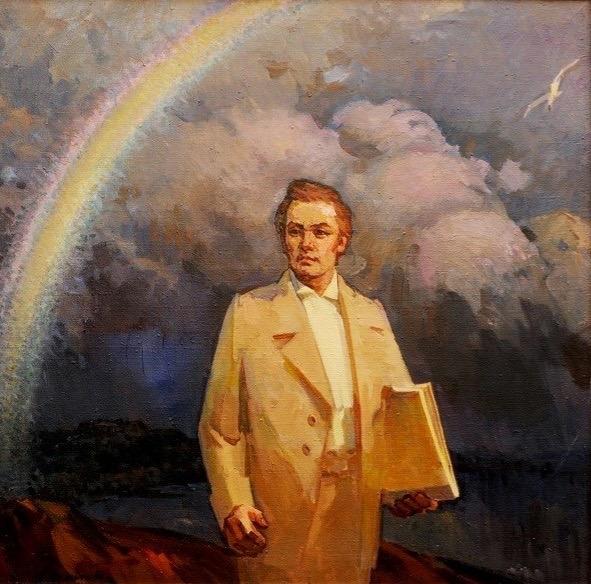 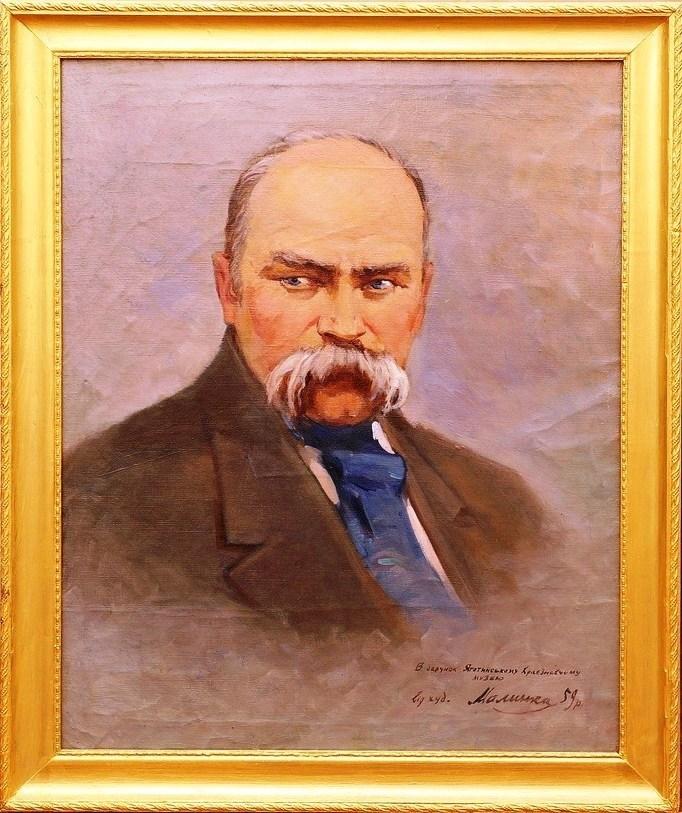 Taras Shevchenko Museum in the Academy of Arts